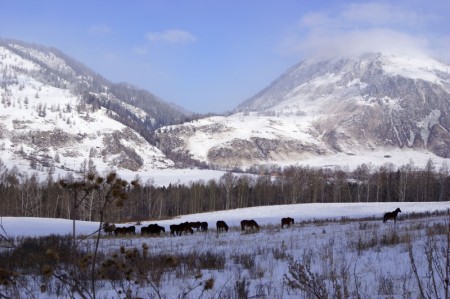 Representatives for the adjacent protected areas Katon-Karagai National Park in Kazakhstan and Katunskiy Biosphere in Russia reaffirmed their willingness to cooperate closely and strive for the establishment of a large Transboundary Biosphere Reserve Altai. At a workshop on 25-28 February 2014 in Ust-Kamenogorsk, East Kazakhstan, the participants acknowledged the considerable potential this would have in securing the conservation of biodiversity and sustainable development in the Altai Mountains. The participants identified a series of concrete benefits to be generated by the creation of the UNESCO Transboundary Biosphere Reserve (TBR) across neighbouring states. These comprised of the following:

The initiative of establishing the bilateral TBR “Altai” is viewed as an important stepping-stone towards a quadrilateral TBR including Chinese and Mongolian protected areas as well as making a contribution to the implementation of the World Natural Heritage Site “Golden Mountains of Altai”. The TBR would also help towards meeting targets set under various international conventions such as Convention on Biological Diversity (CBD), the United Nations Framework Convention on Climate Change (UNFCCC) and others.

The workshop was facilitated by the Centre for Econics and Ecosystem Management, Eberswalde, Germany, and carried out in the framework of the project “Development of a management plan for the projected Transboundary Biosphere Reserve (TBR) Altai”, sponsored by the German Federal Agency for Nature Conservation (BfN). Several members of the Joint Commission for the establishment of the Transboundary Reserve (TBR) “Altai” participated in the meeting, including representatives of the Man and the Biosphere (MaB) Committees of Russia and Kazakhstan as well as a representative of the BfN.

The TBR “Altai” would comprise of the territories of Katunskiy Biosphere Reserve, consisting of Katunskiy Strict Nature Reserve and Beluhka Nature Park, as well as Katon-Karagaiyskiy National Park and its adjacent areas, which ultimately will make up the Katon-Karagaisjkiy Biosphere Reserve. The favourable conditions and circumstances in both the project region and internationally provide the unique opportunity for the proposed UNESCO TBR “Altai” to become a globally important model for large-scale biodiversity and socio-economic sustainability.

The project “Development of a management plan for the projected Transboundary Biosphere Reserve Altai” is producing a detailed analysis and a strategic portfolio for the UNESCO nomination of the TBR by applying the MARISCO method developed by the Centre for Econics and Ecosystem Management. This method was elaborated in partnership with several players, in particular, the German development agency GIZ, Deutsche Gesellschaft für Internationale Zusammenarbeit. MARISCO stands for adaptive MAnagement of vulnerability and RISk at COnservation sites; it is structured around an ecosystem-based situation and risk analysis and systematically facilitates the development of a consistent strategic portfolio for adaptive management. 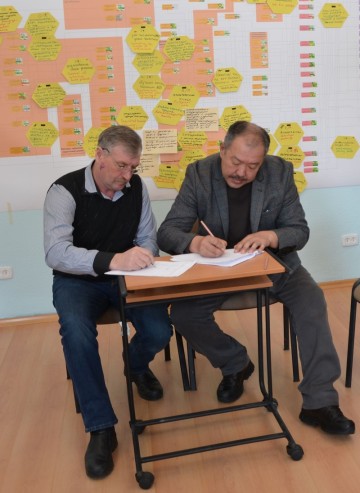 Sustainable development in the area of the projected Transboundary Biosphere Reserve Altai is based on functional ecosystems ©Pierre Ibisch
copAltai_ecosyst_Mar14.jpg
JPG-Datei [3.3 MB]

Sustainable development in the area of the projected Transboundary Biosphere Reserve is based on functional ecosystems (2) ©Pierre Ibisch
copAltai_ecosyst_Mar14.jpg
JPG-Datei [3.3 MB]

+++ 15-21 September 2019. In the course of a DAAD East-West-Dialogue project (with Ukrainian, Moldovan and Romanian partners), Centre staff, students from Ukraine, Moldova and Germany as well as partners, experts and practitioners from several biosphere reserves in Ukraine, Moldova and Romania met for the first time in Moldova.

Hosted by the Moldovan State University, the group visited the first Moldovan biosphere reserve in the Lower Prut region, which was established in 2018.

The students group worked in tri-national teams on this real life case study, using the Open Standards for the Practice of Conservation methodology. The experts group visited an area of the eastern fringe of European Beech distribution, the ‘Land of Beech’ protected area north of Chisinau +++