+++ 18 May 2021. Hamburg's environmental authority has suspended the review process on the feasibility of using Namibian bush biomass until further notice. A year ago, in response to inquiries from Namibia and NGOs, the environmental authority launched an open-ended process to examine the chances of using Namibian bush biomass for energy in Hamburg. The Centre for Econics and Ecosystem management has recently prepared a report for the Deutsche Umwelhilfe on the subject of bush encroachment in Namibia. Centre staff members Prof. Pierre Ibisch and Dr. Axel Schick warned that the scientific basis for an energetic use of bush wood in Hamburg was not given. According to them, neither the growth rates mentioned by the Hamburg environmental authority nor the areas of Namibian scrubland indicated are in line with current scientific findings. It is also problematic that the effects of climate change on vegetation are not taken into account and the negative consequences of the proliferation of woody plants are not proven beyond doubt. Since the project is therefore based on false assumptions, the authors strongly advise against importing bushwood from Namibia +++ 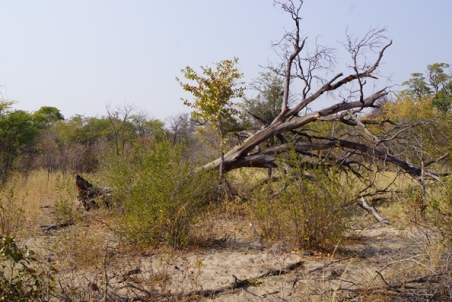 +++ 4-5 March 2021. Beyond post-Soviet: Path dependencies and new  trajectories of change in Central Asia - Web-Conference. Almost three decades after the dissolution of the Soviet Union, legacies of the Soviet past are still a dominant research theme on Central Asia. By going beyond the post-Soviet category, the second CASNiG (Central Asian Studies Network in Germany) workshop aims to critically re-evaluate the role of path dependencies vis-à-vis new actors and processes in shaping current societal (including social-ecological) developments in the region. Among others, Central Asia has become subject to new geopolitical interests, encounters increasing global interdependencies of socioeconomic development, and is confronted with high vulnerabilities in the context of new long- and short-term crises such as climate change and global pandemics. For programme and registration as participant, click here +++ 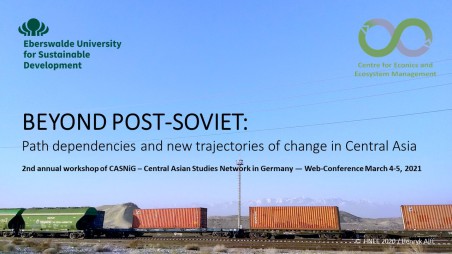 +++ 11 February 2021. Several researchers of the Centre for Econics and Ecosystem Management support a letter to leading politicians stating forest preservation and restoration should be key tools for achieving this goal and simultaneously helping to address our global biodiversity crisis. 500 scientists urge not to undermine both climate goals and the world’s biodiversity by shifting from burning fossil fuels to burning trees to generate energy +++

Letter Regarding Use of Forests for Bioenergy
Scientist Letter to Biden, von der Leyen[...]
PDF-Dokument [1.0 MB]

+++ In 2019, the National Forestry University of Ukraine (UNFU) in Lviv. has awarded an honorary doctorate to Pierre Ibisch. Due to the pandemic, the Honour Ceremony in 2020 could not take place. After his return from Latin America, in 2003, and as part of his work at the Eberswalde University for Sustainable Development, Pierre systematically had built up cooperation with partners in Eurasia. From 2006 onwards, the cooperation with Ukrainian partners in particular deepened. Since 2014, Pierre  and his staff have been involved in intensive cooperation with UNFU This has led to an extensive exchange of students, lecturers, joint study trips and projects. Thematically, the cooperation with Ukraine is about forest ecosystems, sustainable development, climate change adaptation as well as inter- and transnational cooperation. On the occasion of his services to this flourishing cooperation, UNFU awarded Pierre L. Ibisch an honorary doctorate +++

+++ 11 November 2020. Heilige Hallen​ in Mecklenburg-Western Pomerania is considered the oldest beech forest in Germany. The beech forests in a Natura 2000 area in the neighbourhood of Heilige Hallen are in bad shape. Excessive felling and thinning have led to the death of trees during the extreme summers 2018-2019. A legal opinion suggests that there are grounds to suspect that in a Natura 2000 area, despite clear warnings in the management plan of 2015, felling without impact assessment has caused a deterioration of the condition. The responsible forestry office in Lüttenhagen refuses to provide information in accordance with the Environmental Information Act. In the middle of the 19th century, the Grand Duke Georg of Strelitz ordered the preservation of this forest area. The 25-hectare core area of the forest was already placed on the list of natural monuments in Mecklenburg in 1908 and has been a nature reserve since February 24, 1938. In 1993 the protected area was extended from 25 to 65.5 hectares. Since about 1950 no management has taken place +++ 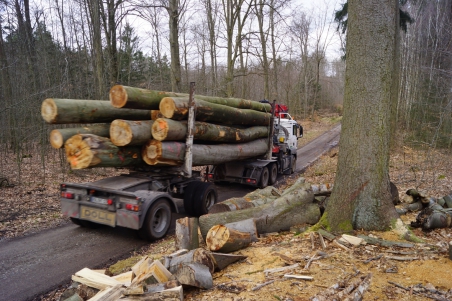 +++ 26 October 2020. Brandenburg Forest Conference. Pierre Ibisch and Jeanette Blumröder present findings obtained in the course of Centre projects and recommend to follow an ecosystem-based strategy for dealing with the forest crisis. Amongst others, they call for an immediate cutting moratorium in close-to-nature broadleaved forests that suffer from the extreme drought and heat summers since 2018 +++

+++ 2-3 October 2020. A group of experts belonging to different Montenegrin organizations participated in an online workshop organized by ENVPRO, Montenegro, where they designed the methodological process for applying the MARISCO approach to the Bojana River. Pierre Ibisch introduced the group to the methodology and moderated the session on geographical scoping. The river basin represents a transboundary ecosystem where relevant influences also come from the Albanian territory. In Montenegro, methodological standards for participatory sustainable development planning are to be explored, which could potentially be suitable for a larger project later on +++

+++ July to September 2020. The development of strategies for Ecosystem-based Adaptation (EbA) to climate change with Ukrainian Biosphere Reserves continues despite Covid 19 travel ban and restrictions (project being part of International Climate Initiative - IKI). Experts and staff of the three partner Biosphere Reserves developed an extensive strategic portfolio, covering all the main ecological-social system clusters of their respective areas. Strategy evaluation and rating schemes were elaborated during offline work sessions by the BRs and partners informing the ongoing strategy selection process. Currently, the Biosphere Reserves are selecting key strategies for climate adaptation and develop detailed operational and monitoring plans to include them in their upcoming management activities. The process also provides room to talk about future activities beyond the project funded by the German Ministry of Environment. Part of the task is also the identification of allies and where funds can be acquired +++

+++ 11 September 2020. The hot and dry extreme summers of 2018 and 2019 have been causing a major forest crisis in Europe. The situation in 2020 substantially worsened. In Germany, a dispute on adaptation of forest management to climate change unfolds. We plea for a shift towards ecosystem-based solutions. Many foresters seem to underestimate the power of ecosystems and overestimate their own wisdom. Interview in Deutsche Welle television, filmed in Treuenbrietzen, a pine plantation, destroyed by a fire +++

+++ 8 July 2020. Together with staff from various organisations including Naturwald Akademie or Forum Umwelt & Entwicklung, Jeanette Blumröder and Pierre Ibisch followed the invitation of NUKLA (Naturschutz und Kunst Leipziger Auwald e. V.) and visited the Leipzig gallery forest. They witnessed forest management practices that clearly harm the vulnerable forest ecosystem. The Natura 2000 site does not seem to be well protected; the ecological condition is worsening due to clearcuts and planting of tree species that are not native to the ecosystem (e.g., chestnut, checker tree). The forest is the scene of a remarkable legal precedent: recently, the Bautzen Higher Administrative Court overturned the ruling of the Leipzig Administrative Court in the GRÜNE LIGA Saxony/NuKLA case against the City of Leipzig and its Forest Management Plan 2018 regarding the forest management in the Natura 2000 site +++ 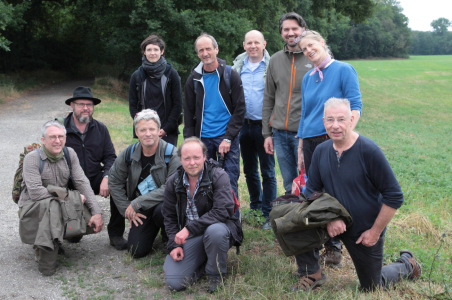 +++ 25 June 2020. Misguided forest action in EU Biodiversity Strategy: Four forest experts from Spain, Poland, Sweden and Germany, including Pierre Ibisch, give a bad report on the EU's new biodiversity strategy. In an article published in Science, they criticize the forest-related objectives. One point of criticism concerns actionism and symbolic actions such as the mass planting of tree seedlings. Instead, they call for the necessary climate change adaptation in forestry to be designed on the basis of recognised ecological knowledge +++

+++ 10 June 2020. The dossier "The futile search for the super tree" (study in German: "Die vergebliche Suche nach dem Superbaum)", which was commissioned by the Green Party's spokesperson on agricultural policy in the EU Parliament, Martin Häusling, and compiled by Stephan Börnecke, quotes contributions by Pierre Ibisch and takes up demands for an ecosystem-based orientation of forest management. In a webinar, Pierre Ibisch, together with MEP Martin Häusling, NABU President Jörg-Andreas Krüger and Diana Pretzell from WWF, was a panelist in the context of the study presentation (in German)

+++ 10 May 2020. Recently, Centre staff visited forest areas affected by calamities (barkbeetle outbreaks, windthrows and drought) as well as subsequent salvage logging in various parts of Germany. The trip revealed serious facets of the unfolding forest crisis with large-scale clearcuts and conventional reforestation practices that contribute to ecosystem degradation. Slidecasts document the practices that give reason for concern and seem to be against the principles of sustainable forestry (in German) +++ 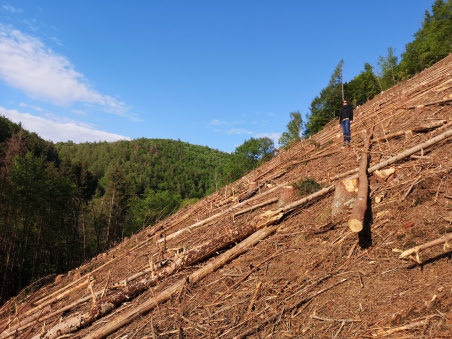 +++ 8 May 2020. A group of scientific reviewers of the PRIMOFARO study on Romanian old-growth forests (commissioned by EuroNatur Foundation and published in 2019), including Pierre Ibisch, sent a response to the so-called ‘forest expert group at the Transylvanian University of Brasov’. The report submitted to the Romanian government moves strong critics to PRIMOFARO. In defence of the PRIMOFARO study, the reviewers now raised the concern that the Brasov report may not meet the scientific standards and also criticize the unacceptable form of the anonymous statement issued without appropriately checking the database. Copies of the letter to Brasov University were sent to decision makers and key actors, including the Romanian government and members of the European Parliament +++

+++ 3-5 March 2020. More than 100 scientists gathered at Potdam Institute for Climate Impact Research (PIK) and discussed the challenges related to 'Managing Forests in the 21st Century'. Pierre Ibisch and Jeanette Blumroeder contributed two oral presentations on the relevance of forests for (micro)climatic cooling and buffering +++

+++ 26-28 February 2020. Pierre Ibisch gave a keynote talk at the European Forest Institute's (EFI) conference 'Governing and managing forests for multiple ecosystem services across the globe' (at Research Centre CAESAR, Bonn, Germany). The conference objective was to compile and synthesise the scientific evidence related to the current state of integrated forest management approaches. The title of Pierre's talk, which was co-authored by Jeanette Blumroeder, was 'Forests and multiple ecosystem services: an ecosystem-based conservation perspective' +++

How do major global challenges such as climate change and biodiversity loss affect forests globally, and what can forest governance and management do? How can we deal with rising and changing demands for forest products and ecosystem services due to global population and economic growth, and urbanisation?

EFI in collaboration with documentary filmmaker Patrick Augenstein, interviewed Pierre Ibisch, Professor at Eberswalde University for Sustainable Development. This was part of the international conference “Governing and managing forests for multiple ecosystem services” that brought together policymakers, practitioners and academic researchers from different fields on 26-28 February in Bonn.

+++ 14 February 2020. Another paper communicating our research on boreal forest use under the FSC label (Forest Stewardship Council) has been published in Ecological Processes. The title of the study is Clearcuts and related secondary dieback undermine the ecological effectiveness of FSC certification in a borel forest. Another paper on the ecological effectiveness with a special focus on the clearcutting practices endorsed by FSC was published in Ecological Indicators. Our first paper on effectiveness of FSC was published in 2018 in Challenges in Sustainability. Amongst others, we concluded that large-scale clear-cutting practice within Intact Forest Landscapes, which means the logging of primary forests, feeds doubts about the consistency of FSC and its credibility +++