Biennial meeting of the Society for Conservation Biology, Baltimore, USA

Representatives of the Society for Conservation Biology - Europe Section participated in a symposium on ‘roadless areas’ as important target areas for biodiversity conservation in Baltimore, USA. The symposium was part of the biennial International Congress for Conservation Biology 2013, celebrated at the Baltimore Convention Center, from 21 to 25 July, and was organized by Dominick de la Sala, president of the North American section of SCB. Further SCB sections represented were Australia, Latin America and Caribbean, Oceania, as well as the Marine section.

Nuria Selva and Pierre Ibisch, both members of the Policy Committee of the Europe Section, delivered papers on the European perspective on roadless areas and biodiversity and on a first assessment of the global roadless areas. The presentations were a result of an ongoing cooperation with Google and Kriton Arsenis, Member of the European Parliament. Collaborators of the Centre for Econics and Ecosystem Management, namely Monika Hoffmann and Julia Sauermann, have been working hard on processing and analysing raw data provided by Google.

Majority of the speakers at the roadless areas symposium.

Kriton Arsenis contributed a video message to the symposium, and once more proved that worldwide he is the leading politician striving for a better conservation of roadless areas. Rebecca Moore, presented the contribution by Google to the project. At Google, Rebecca conceived and leads the Google Earth Outreach program, and initiated and leads the development of Google Earth Engine.

Pierre’s paper, also co-authored by members of the European SCB Policy Committee, Kriton Arsenis and Google staff, presented new results to be published in the near future. For the first time, roadless areas are assessed on all continents. Among others, coverage of functional ecosystems, biomes and protected areas were analysed. Less than 4% of the roadless areas are protected by strict reserves, such as wilderness areas or national parks (IUCN categories I + II); best coverage has been achieved in North America. 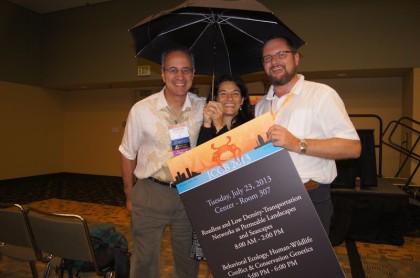 Dominick de la Sala, president of the North American section of SCB and organizer of the symposium, with Nuria Selva and Pierre Ibisch.

A systematic approach to mapping and assessing the conservation status of roadless and low-traffic areas is generated by the creation of a Road Disturbance Index. This index takes into account various types of information on road fragmentation as well as traffic intensity and is designed to inform conservation planning and environmental policy making. The quality of the final mapping results is then tested against index measures for a range of proxy indicators not directly related to road data, such as population density or presence of cities. The spatial distribution of the identified roadless areas is assessed according to ecosystem functionality, biodiversity patterns, protected area coverage and selected socioeconomic parameters. Socioeconomic and environmental information, such as population, economic growth or primary production, is used in a risk assessment describing the probability of roadless areas to be disturbed or eliminated by road development.

Roadless areas provide enormous benefits to biodiversity and societies; they shall be an important focus of conservation efforts

A main effect of roads is what we have termed “contagious development”: roads provide access to previously remote areas, thus opening them up for more roads and developments, and triggering land-use changes, resource extraction and human disturbance. In this context, keeping road-free the remaining large unfragmented patches of natural habitats is of crucial importance for conservation. Roadless and low-traffic areas represent relatively undisturbed natural habitats and functioning ecosystems. They contribute to the preservation of native biodiversity, increase landscape connectivity, act as barrier against pests and invasions, and render many ecosystem services. They get special relevance in the context of climate change because their higher resilience and buffering capacity. In Europe, roadless areas have become a rare element of the landscape. An analysis of conservation legislation in Europe illustrates that although most laws aimed at protecting targets which are inherent to fragmentation, like connectivity, ecosystem processes, or integrity, roadless areas are widely neglected. In Germany, most low-traffic and roadless areas (75%) lie outside the Natura 2000 network, while in Greece less than 3% of the roadless areas are protected as Natura 2000 site. Recent initiatives include the Report on Wilderness by the European Parliament, the European Union Strategy on Green Infrastructure or the Federal Defragmentation Programme in Germany.

+++ 11 November 2020. Heilige Hallen​ in Mecklenburg-Western Pomerania is considered the oldest beech forest in Germany. The beech forests in a Natura 2000 area in the neighbourhood of Heilige Hallen are in bad shape. Excessive felling and thinning have led to the death of trees during the extreme summers 2018-2019. A legal opinion suggests that there are grounds to suspect that in a Natura 2000 area, despite clear warnings in the management plan of 2015, felling without impact assessment has caused a deterioration of the condition. The responsible forestry office in Lüttenhagen refuses to provide information in accordance with the Environmental Information Act. The 25-hectare core area of the forest has been a nature reserve since 1938. In 1993 the protected area was extended from 25 to 65.5 hectares. Since about 1950 no management has taken place +++