+++ April 2013: A paper just published in Landscape Ecology presents a new methodology for the assessment of disturbance through roads and traffic. The so-called SPatial ROAd Disturbance Index, short SPROADI, is based on a spatial assessment of road density and corresponding landscape fragmentation as well as traffic intensity﻿ +++﻿﻿

+++ April 2013: Thanks to the funding provided by the German Umweltbundesamt (Environment Agency), in the course of an advisory project, a delegation from Katunskyi Biosphere Reserve, Russia, and Katon-Karaigaiskyi National Park, Kazakhstan, visited Germany and selected Biosphere Reserves. The ultimate aim was to seek further inspiration for the planning of Transboundary Biosphere Reserve in the Altai mountains. The group was accompanied by Centre staff and a representative of BTE, Berlin. After the circuit the group conducted a planning workshop in Eberswalde +++ 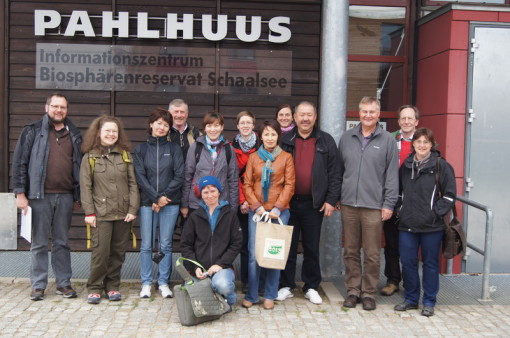 Partners from Altai region (Russia and Kazakhstan), who plan the establishment of a Transboundary Biopshere Reserve, were invited to Germany and visited several German Biosphere Reserves (here at Schaalsee Biosphere Reserve). 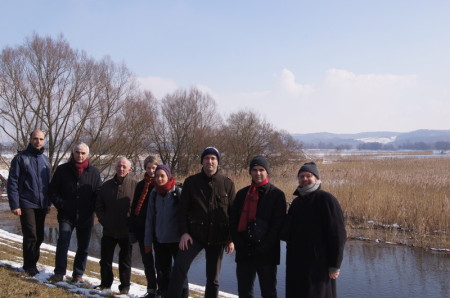 In the course of the meeting the partners from Albania and Kosovo visited Lower Odra Valley National Park and Grumsin beech forest, component part of the UNESCO 'Beech World Heritage Site' of the Carpathians and Germany. 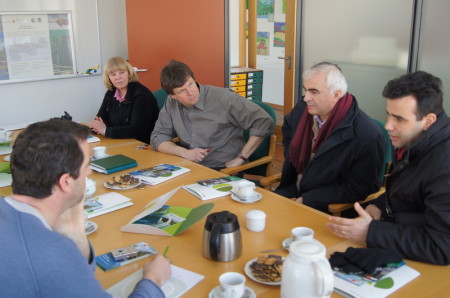 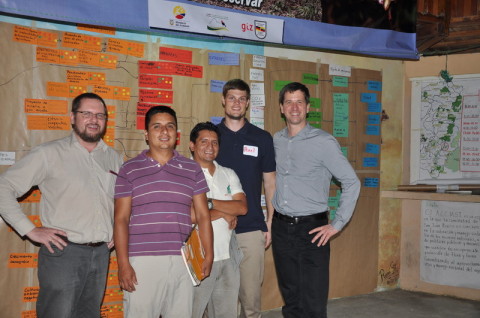 Pierre Ibisch (left) and Christoph Nowicki (right) together with staff responsible for the Tinajillas and Siete Iglesias conservation sites, Jimmy Ortega and Carlos Arevalo, as well as Axel Schick (GIZ-Peru). 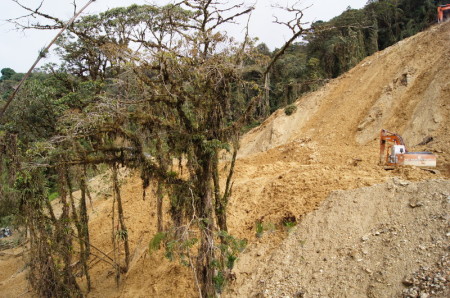 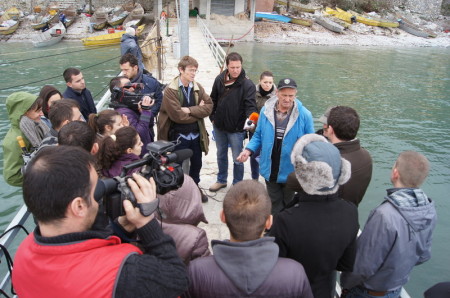 +++ 20-26 January 2013: The Centre for Econics and Ecosystem Management runs a joint workshop with the Agricultural University of Tirana teaching adaptive conservation management to Albanian students (MARISCO method). The case study site is Lake Shkoder, which was visited in the course of the Ecosystem Diagnostics Analysis part of the training workshop held in the city of Shkoder. The Centre lecturers are Lena Strixner, Peter Hobson and Pierre Ibisch. The local partners are Prof. Dr. Arsen Proko and Mark Rupa. The workshop is financed by German Academic Exchange Service, DAAD +++

BiodiversityKnowledge project, a European meta-network for collecting and synthesising knowledge about biodiversity and ecosystem services. The topic was 'Enhancing natural pest control: what do we know?' Pierre Ibisch and Peter Hobson presented the plenary paper 'What about non-knowledge? Seeking solutions to complex problems using principles of post-normal science' and chaired a breakout group workshop on adaptive management +++ 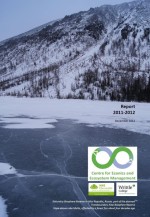 +++ 1 January 2013: The centre has launched its first report covering activities and achievements since its foundation (reporting period June 2012 - December 2012) +++

+++ December 2012: A team of scientists led by Professor Ibisch and professional conservation staff from Russia, Kazakhstan, Germany and the UK met  in Manzherok, Altai Republic, on the proposed UNESCO Transboundary Altai Biosphere Reserve. After an intensive and successful two days of working on a situation analysis of proposed area the team of experts were joined in Gorno-Altaisk parliament building by officials from both countries and a representative from the German Federal Agency for Nature Protection (BfN), Prof. Hans-Dieter Knapp, for the official launch of a 2-year transboundary conservation project. This event was initiated jointly by experts from the Republic of Kazakhstan and the Russian Federation and attracted the support of scientists from the Centre for Econics and Ecosystem Management (Eberswalde University for Sustainable Development, Germany), with funding from the German Federal Ministry for the Environment, Nature Conservation and Nuclear Safety. +++ 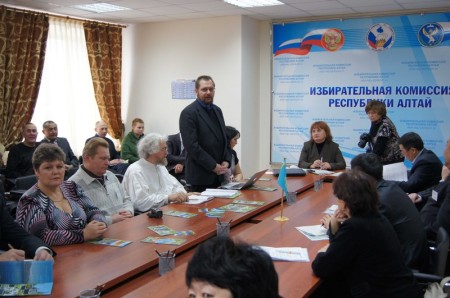 Pierre Ibisch at meeting with national, regional, and local representatives from Russia (Republic of Altai) and Kazakhstan, and Prof. Knapp from BfN, Germany, about potential Transboundary Altai Biosphere Reserve.

+++ 25 Nov 2012: Centre team heads for Altai Republic, Russian Union, to deliver a MARISCO planning workshop with colleagues from Katunskiy Biosphere Reserve, Russia, and Katon-Karagaiskiy National Park, Kazakhstan, and kick off a joint project with the goal of proposing an Altai transboundary Biosphere Reserve +++ 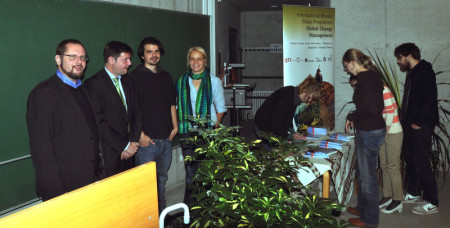 +++ November 2012: A new global map displays the functionality of ecosystems: A new study explores which continental areas have the highest functionality. These are of major relevance for the sustainability of the biosphere and they are areas, which supply most services to humanity. Especially with regard to climate change these exceptionally functional areas deserve particular protection +++﻿ 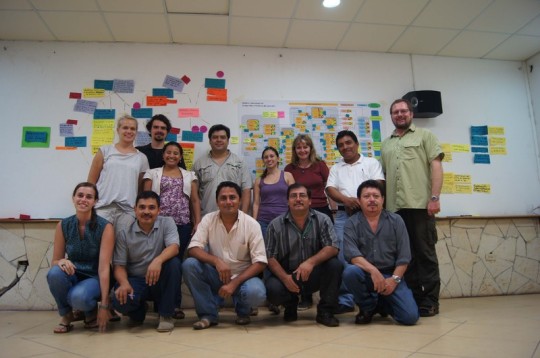 Laura Geiger and Felix Cybulla (back, left) and Pierre Ibisch (back. right) with colleagues from Guatemala and Oroverde after the Sierra del Lacandón workshop. 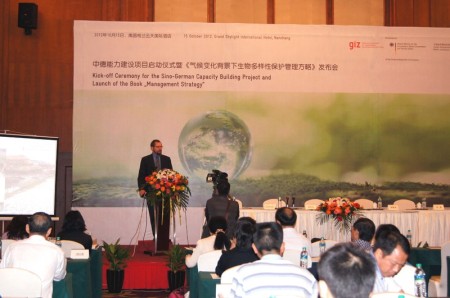 +++ 1 September 2012: Third European Congress of Conservation Biology (ECCB) is concluded in Glasgow. Centre staff was involved in pre-congress training course on adaptive management, a thematic poster exhibition on econics, various symposia, and in activities of the Europe Section of the Society for Conservation Biology +++ 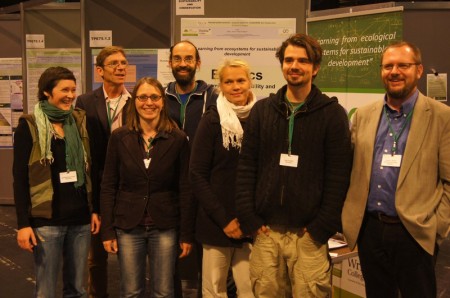 Part of the Centre team at ECCB 2012 in Glasgow

+++ August 2012: We prepare for an active participation at the European Congress of Conservation Biology - ECCB 2012 in Glasgow +++

+++ March 2012: project on sustainable Management of the surroundings of the World Heritage Site "Primeval Beech Forests of the Carpathians in Slovakia and Ukraine and Ancient Beech Forest of Germany" has been concluded +++

+++  November 2011: Stakeholder workshop for climate-adapted conservation plan for the County of Barnim +++

+++ In the week from June 20-25 2011, Xavier Escute, from Barcelona, Spain (Obra Social de CatalunyaCaixa. Area de Territori i Medi Ambient﻿), coach with the European Coaches Network, together with staff of the Centre for Econics and Ecosystem Management has given the module Adaptive Conservation Site Management +++

+++ On the occasion of his 65th birthday, we dedicate our efforts and achievements in creating the Centre for Econics and Ecosystem Management to Wilhelm Barthlott﻿ +++

+++ 22 June 2011 +++ The Centre for Econics and Ecosystem Management, in collaboration with the Faculty of Forest and Environment Workshop, offers a workshop on the Globio methodology, given by Wilbert van Rooij (Aidenvironment) +++

August/September 2012. We prepare for an active participation at the ECCB 2012 in Glasgow. Apart from various contributions to different symposia and sessions, members of the centre will organize and present a Thematic Poster Exhibition on econics. Pierre Ibisch is member of the Board of Directors of the Europe Section of the Society for Conservation Biology, organizer of the congress; he is also chair of the Policy Committee of this section. 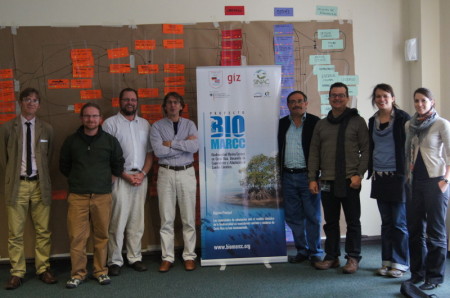 In November/December 2011, as well as in February/March 2012, members of the Centre for Econics and Ecosystem Management carried out various activities in Central America.

In the beginning of December, in Costa Rica, a four-people-team, led by Pierre Ibisch and Peter Hobson, worked for the Deutsche Gesellschaft für Internationale Zusammenarbeit (GIZ). The team ran a MARISCO workshop on the vulnerability of two coastal protected areas to climatic change. Together with Costa Rican scientists and the teams of the the Cahuita and Manuel Antonio National Parks, situated at the Caribbean and the Pacific respectively, in a first workshop a systemic problem analysis was accomplished. In the first days of March an event on the development of strategies of adaptation to climate change has followed. 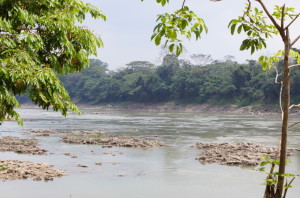 The associated researcher and Ph.D. student of the Centre, Laura Geiger, travelled directly from Costa Rica to Guatemala, where the Centre works for the environmental organisation OroVerde about risks and their management in the rainforest National Park Sierra del Lacandón (Petén, Maya Biosphere Reserve).﻿

Pierre Ibisch and Peter Hobson visited the national park in early March and gathered important insights especially related to fire-related risks and the potential of succesional agroforestry, which applies principles of econics. 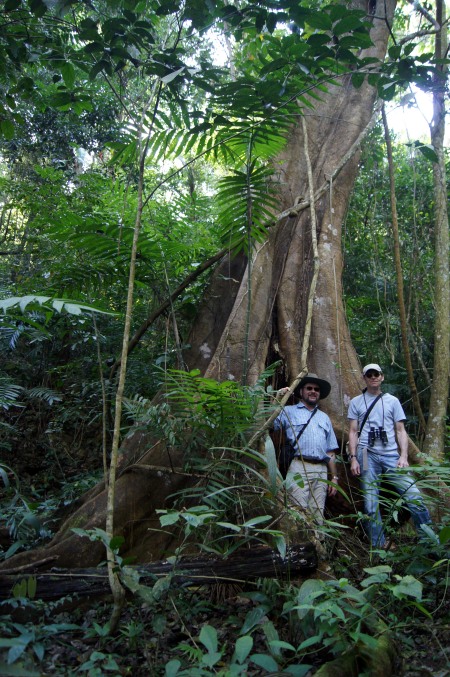 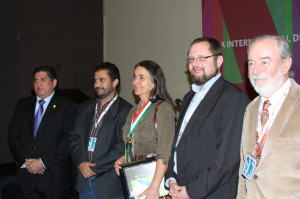 Pierre Ibisch, in December 2011, followed an invitation to Mexico, where the University of Guadalajara arranged a first “International Colloquium on Biodiversity, Natural Resources and Society”. The colloquium was conducted as part of the Guadalajara International Book Fair, the second largest in the World after Frankfurt on the Main. In this year, Germany has been the Guest of Honour of the fair that ended on the fourth of December. Pierre Ibisch was invited as well in the context of the awarding of the newly donated Alexander Von Humboldt Price to the Mexican scientist and conservationist Julia Carabia.

Alexander von Humboldt visited Mexico more than 200 years ago and gave vital impulses for the development of science in this country. With the invitation the University of Guadalajara strives for the reactivation of scientific cooperation with German scientists in the field of nature conservation and natural resource management. Pierre Ibisch gave a lecture on the topic of biodiversity conservation under global change. After the colloquium he conducted cooperation talks with representatives of the Mexican Academy and visited the scientific station in `Las Joyas‘ in the Manantlán Biosphere Reserve, home of a wild archetype of maize.﻿

On November 3rd, 2011 a stakeholder workshop was conducted including relevant actors from different sectors such as forestry, water management, agriculture and nature conservation. Following the Open Standards for the Practice of Conservation a situation analysis was developed, discussing the direct threats of Barnim's conservation targets as well as identifying underlying causes leading to the direct threats. +++ 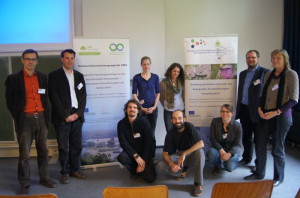 Oldenburg meeting of the GfOe: Centre speakers together with colleagues from Eberswalde University for Sustainable Development and Potsdam University, September 8.

Check out the abstract book of the Oldenburg conference.

Discussions and consultations with Chinese delegations

On June 25 and 28 2011, staff of the Centre for Econics and Ecosystem Management discussed various issues such as analyses of protected area vulnerability against climate change and close-to-nature forestry with two groups comprising scientists, practicioners and decision makers from protected areas and authorities of Jiangxi Province, as well as from Beijing University of Forestry, CRAES and the Chinese academy of science. The groups were accompanied by representatives of the German Federal Agency for Nature Conservation (BfN) and the German Agency for International Cooperation (GIZ). 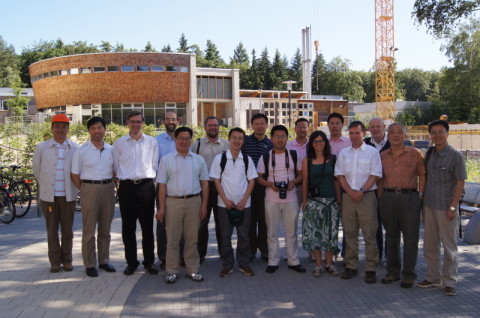 Chinese delegation with Eberswalde staff and representatives of BfN, CIM and GIZ on the Eberswalde 'Forest Campus'

The Centre for Econics and Ecosystem Management, in collaboration with the Faculty of Forest and Environment Workshop, offered a workshop on the Globio methodology, given by Wilbert van Rooij (Aidenvironment).

The global model of biodiversity called „Globio“ is a tool for supporting, consulting politics on global and national level. It is a modelling framework which is suitable for:

1)     Estimation of anthropogenic influences on biodiversity in the past, present and future

2)     Assessment of importance of single influences

The anthropogenic influence on biodiversity is measured by biodiversity indicators, the mean species abundance and the expansion of ecosystems. Globio is based on origin-impact relations which were taken from literature. Due to the fact that Globio uses spatial data about environmental variables, no accurate data of species and their distribution are necessary.

Diverse assessments were implemented with Globio, e.g. the Global Biodiversity Outlook and the Global Environment Outlook. In the one-day workshop the students will learn basics of modelling with the model Globio. The docent of the workshop is one of the co-developers of this model and now working for the organisation 'Aidenvironment' in the Netherlands. He specialised in modelling biodiversity. Previously he worked for the Netherlands Environmental Assessment Organisation where he worked intensively with the model and already organised several training courses.

Use the following link for more information about Globio: http://www.globio.info/.

The Centre for Econics and Ecosystem Management has been launched 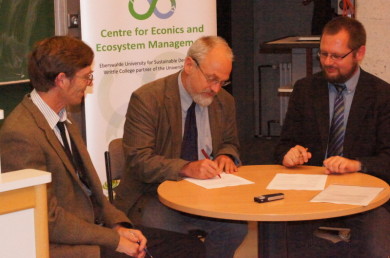 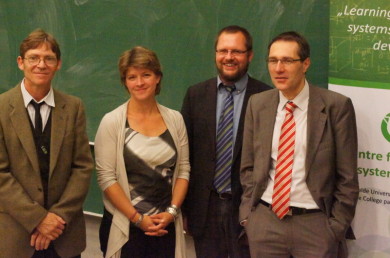 The founding directors of the new centre with members of the advisory board (from the left: Dr. Peter Hobson, Ilke Tilders, Prof. Pierre Ibisch, Sascha Mueller-Kraenner).

German press release about the opening of the centre
PM-HNE-Eberswalde-eroeffnet-Center-for-E[...]
PDF-Dokument [238.4 KB]

English press release about the opening of the centre
econic_press release.pdf
PDF-Dokument [78.6 KB]

Greeting address by Ilke Tilders, Foundations of Success, on the occasion of the opening of the centre.
speech Ilke Centre for econics and ecosy[...]
PDF-Dokument [55.9 KB]

The Centre for Econics and Ecosystem Management is officially launched.

Prof. Dr. Peter Spathelf,  Welcome on behalf of the Faculty of Forest and Environment, Eberswalde University for Sustainable Development

Econics: principles into practice using forest management as an example

Signature of the Memorandum of Understanding