Pierre's pictures of the day

It was our friend and colleague Max Rossberg from European Wilderness Society, who suggested sharing a photographic documentation of some of our tours and walks. Actually, I learned using photographs for communication and documentation from my professor of botany and mentor Wilhelm Barthlott. Very grateful for all the inspiration he provided by lectures and talks. Later, I learned that many foresters and forestry scientists rather dislike pictures and tend to claim they were manipulative and anecdoctical. Well, they may underestimate the documentary power and value of photographs that of course are part of scientific evidence. Photographs show what is or was, can trigger questions and reflections, and ... if they show conditions we do not like, well, then let us work towards a world we want to see ... 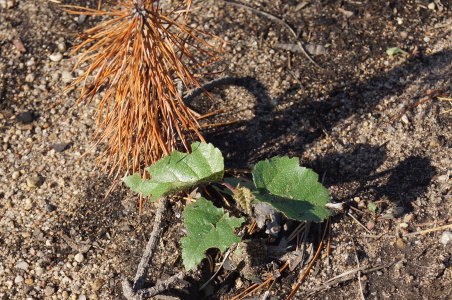 10 September 2019. A young birch spontaneously grows next to a dead planted pine on a clearcut in Treuenbrietzen, Brandenburg (Germany), where a forest fire in August 2018 destroyed the earlier pine plantation. What's the message? (Pierre Ibisch) 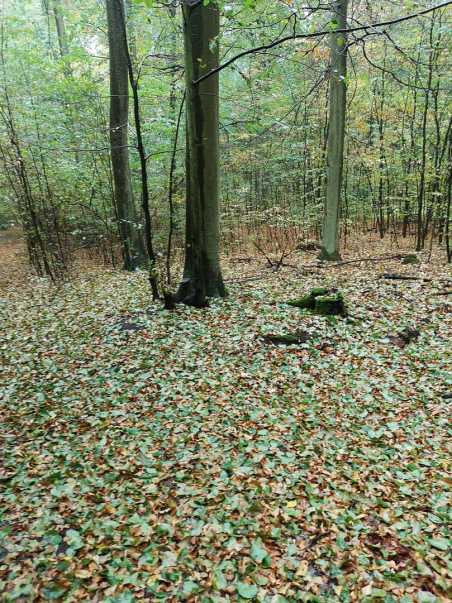 9 September 2019. The drought-stressed forests of northeastern Germany show a wealth of unusual symptoms. Many trees are losing the leaves quite early. In the picture, the beech tree (Fagus sylvatica) failed to recycle valuable nutrients and throws off the green leaves. This causes an unusual autumn colour on the forest floor. Not sure that this tree can return to health and photosynthesis next year .... (Pierre Ibisch) 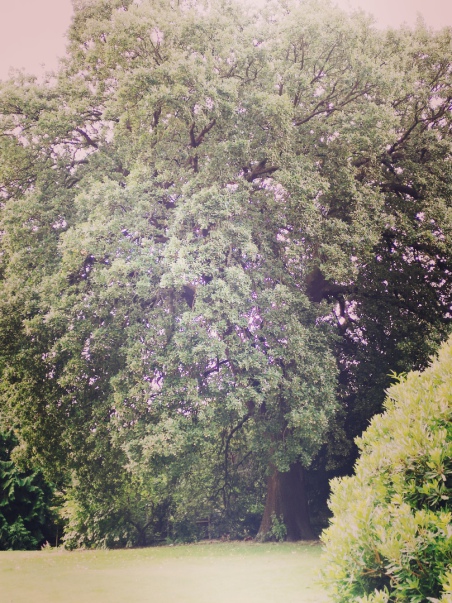 3 September 2019. There is an old oak in front of Charles Darwin’s birthplace, which should be more than 200 years old. This is a tree that connects us with the past; an organism that maybe was observed and touched by the young Darwin before he left Shrewsbury and travelled around the world. A tree that can make you reflect about manifold aspects of science history, but also ecological stability. Is it likely that this tree will be still around in 200 years? Will there be any other tree in The Mount’s garden that connects us with the future? If not, … what will have gone wrong? (Pierre Ibisch) 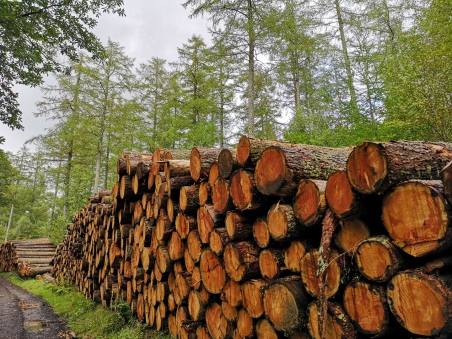 1 September 2019. In many parts of the Lake District in northwestern England, sanitary cuttings and salvage logging are applied to introduced larch stands. For several years now dieback is spreading, which is caused by a fungal disease (Phythophthora ramorum). It is a matter of time that Sitka spruces and other introduced conifer plantations will face the same fate (Pierre Ibisch) 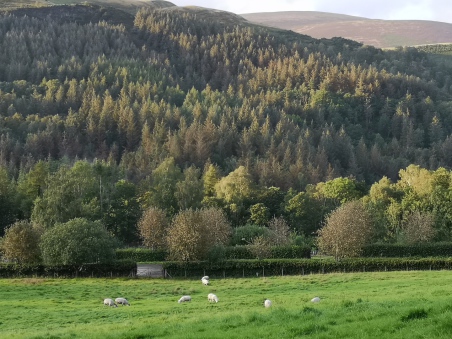 31 August 2019. British forestry heavily depends on monoculture plantations of introduced species. One does not need to be a prophet for projecting a future disaster, similar to what currently happens in continental Europe. Dieback of conifers has already started, and the last two summers have been extreme - even in the parts of England that belong to the most moist places, such as Lake District (Pierre Ibisch) 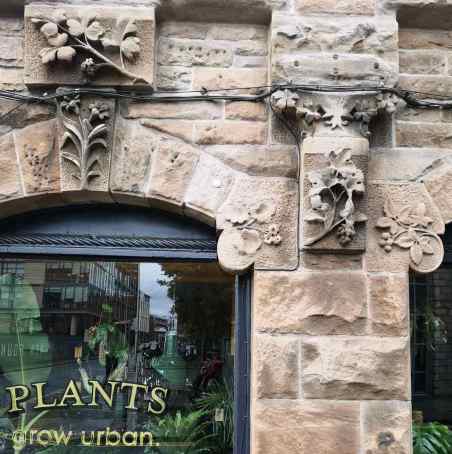 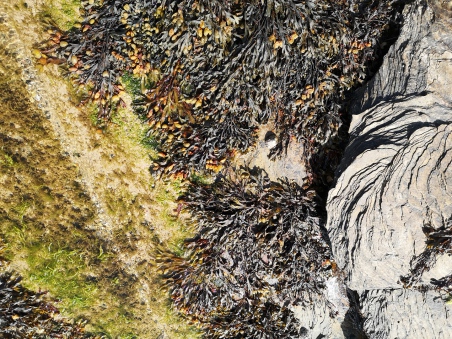 29 August 2019. Life is cool. During low tide and on a sunny summer day, on the beautiful coast of Northumberland, one can witness phenomena of ecosystem energetics. If you compare the surface temperatures of black tang with the lighter bare rock or with the water in the rock pools, you find that the living surface is coolest. The tang is a dissipative system that stores radiative energy away. An underappreciated property of vegetation (Pierre Ibisch) 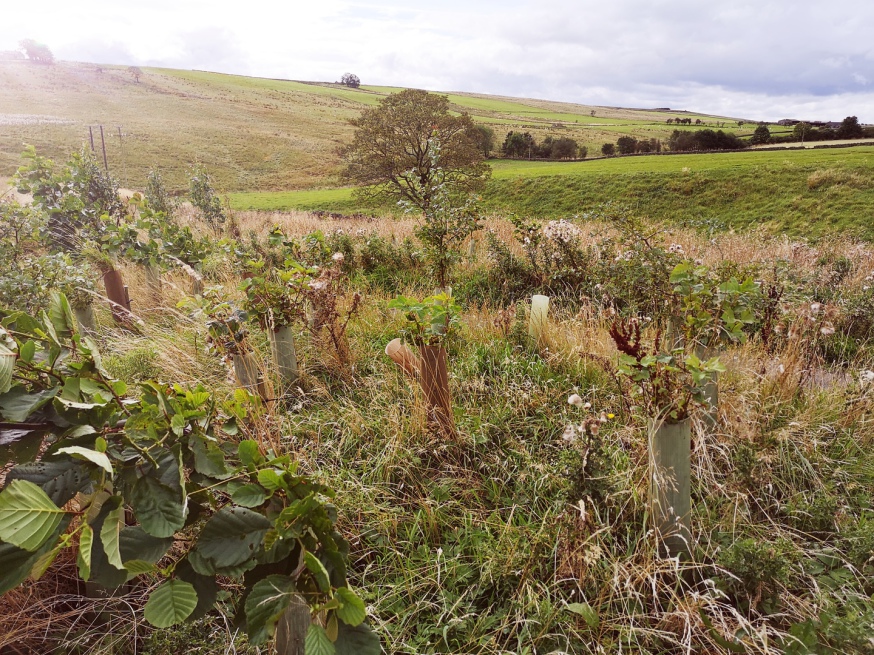 28 August 2019. Putting trees back to the empty landscape is not an easy task, but yet so urgent (Pierre Ibisch) 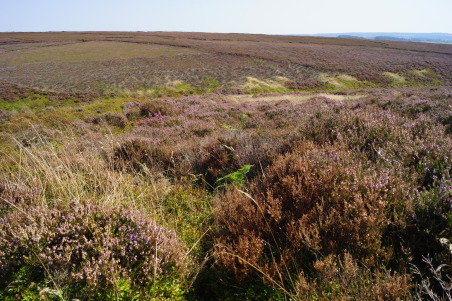 27 August 2019. The hot summer is also threatening the most iconic landscape of the North York moors, the heathlands. It is time to reflect more intensively about maintaining this - theoretically beautiful - vegetation by management such as prescribed burning, cutting heather and grazing, instead of allowing for natural succession that would lead to cooling of the landscape. The clearcut heather plots heat up even more than the mature heathlands. This leads to further drying out of a landscape that used to me moist and cool. Once the vast late summer heathlands will not be beautifully violet, but brownish, conservation management has to consider adapting to climate change. (Pierre Ibisch) 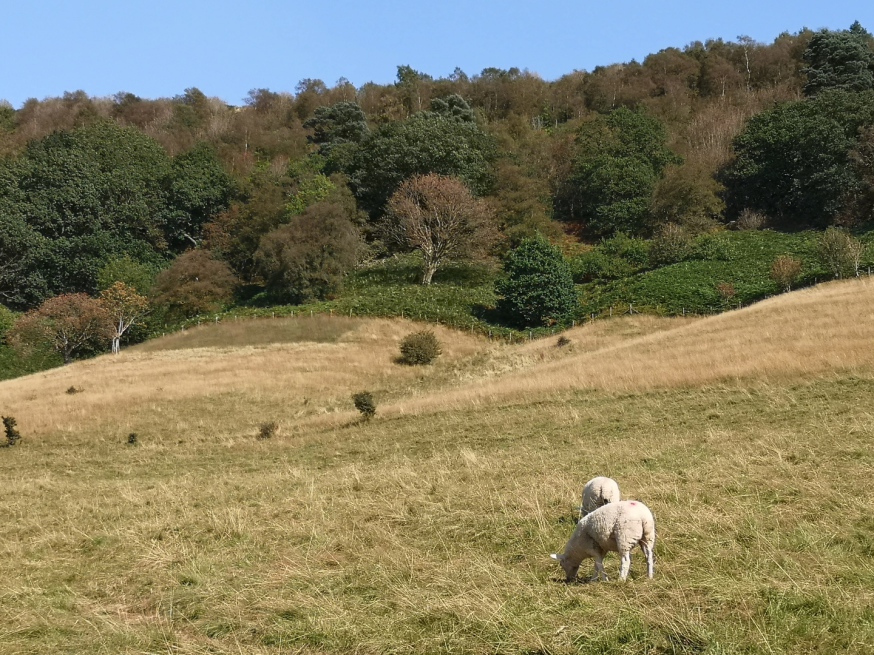 26 August 2019. Extreme temperatures, close to 30°C, mark the grand final of the hot summer 2019. Rowan trees are showing severe loss of leaves; birches and even hawthorne are damaged as well. Climate change impacting even species that could have been supposed to be more resistent (Pierre Ibisch) 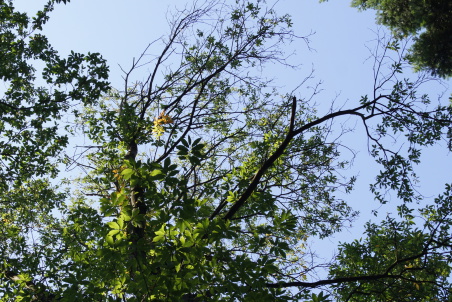 25 August 2019. In the face of extreme drought and heat summers leading to dieback of forest plantations, but also native species, European foresters call for reforesting with new 'miracle' tree species from other ecoregions. A European species that is frequently mentioned and also planted is the chestnut (Castanea sativa) from Mediterranean forests. Unfortunately, this species in its native habitats suffers from problems such as fungal diseases. Also outside the natural range health problems can be oberserved, e.g., in the ancient Ray Woods of Castle Howard in northern England (Pierre Ibisch)

Deforestation of Chiquitano dry forest along the road from Santa Cruz to Roboré, Bolivia. The road was built with multilateral funding to establish a bi-oceanic transport corridor and give access to remote lands in the Bolivian east (P. Ibisch, 3 April 29

24 August 2019. After beng scared by record-breaking Siberian wildfires, the world now looks at South America, where in Brazil, Bolivia and elsewhere vast tracts of forests disappear in flames. International attention and solidarity are very much needed. Yet, many who are concerned now ignore that the burning of the most valuable forests of our planet is an ongoing process ... for decades. Many reactions by European decision makers and leaders are hypocritical as countries of the global North have been responsible for funding infrastructure into the primary forests as well as fueling trade and consumption of products such as soy beans or palm oil that drive deforestation. National strategies and UN documents rarely discuss the linkages between deforestaion and agricultural commodities. Drastic and honest changes are needed (Pierre Ibisch) 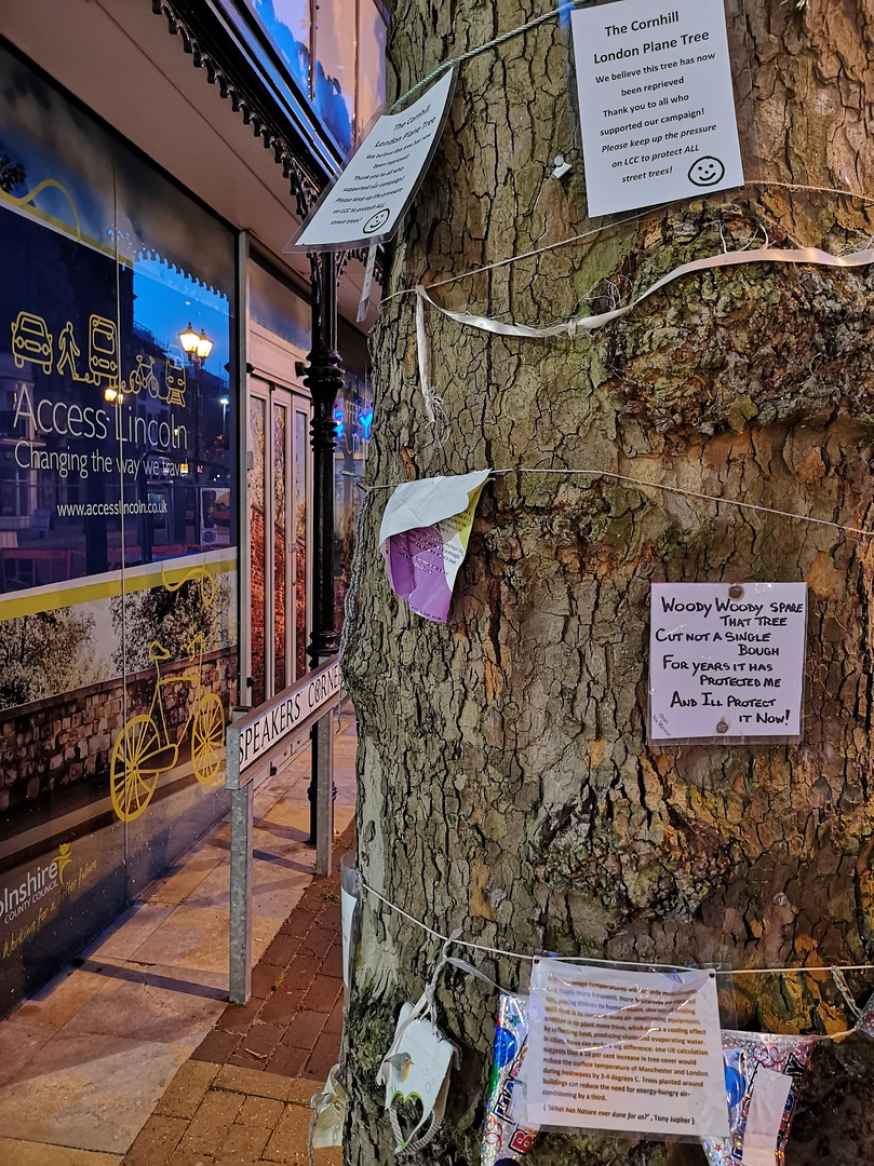 23 August 2019. It is good to see tree-related activism in the Centre of the city of Lincoln, as well as the presence of the Extinction Rebellion movement. (Pierre Ibisch) 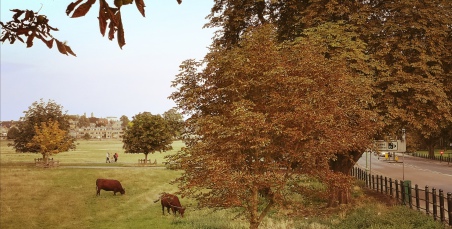 22 August 2019. Like in the good old times, rural and urban areas mixing, livestock production in the city centre. Actually, this is still reality in Cambridge, where cattle grazes the commons, just meters away from famous colleges. What can be and is also criticized, and what can be seen as overly romantic, is really clever in terms of reconnecting urban dwellers to a more complete worldvision. Seeing and smelling a cow whilst you go to work or shopping is pretty different from moving in 'sterile' glass and steel environments, and it will make you different. Apart from the need of greening and ruralizing our urban centres ... (Pierre Ibisch) 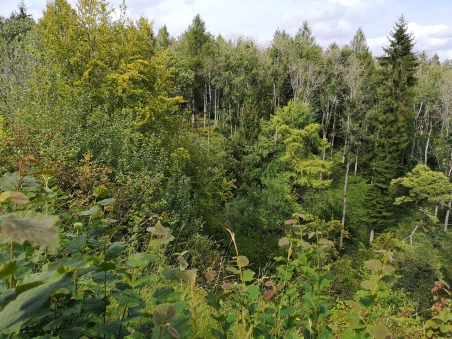 Ash dieback and stressed beech in the Cotswolds, United Kingdom

22 August 2019. The Cotswolds in England are an ancient cultural landscape, today protected as an Area of Outstanding Natural Beauty. Forests and woodlands are less important than meadows and fields, but still an important feature. Conifer plantations, old crippled oaks, and coppiced stands show how much humans have been interfering in forest developmet. One of the larger forests is located next to the old Roman village nearby Chedworth. Currently, this forest is dynamically changing and suffering from heat and drought stress. Ash as formerly important tree species is vanishing due to dieback. Oak is not looking brilliant, and beech shows symptoms of stress. Another forest in Europe where it is completely uncertain, which species are going to take the lead in the near future. At the moment, especially hazelnut is benefiting from the dieback of the canopy. (Pierre Ibisch) 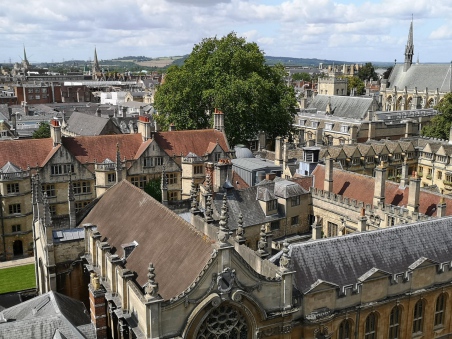 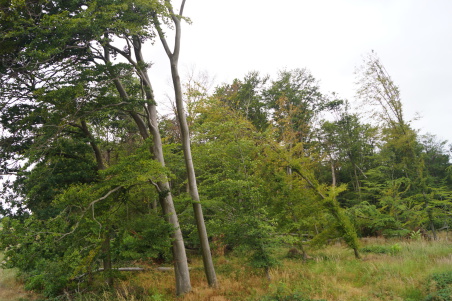 Edge of Hambach forest that faces the opencast pit mine and where trees are suffering from heat, drought and windthrow

19 August 2019. Just passing by Hambach forest, Northrhine-Westphalia, Germany. Like no other forest in Germany, it forest stands for the current climate crisis. Instead of creating new carbon sinks, existing ones are being dismantled by destroying forests in order to obtain fossil fuels, the use of which will intensify anthropogenic climate change. But the climate crisis extends over several scales. Not only is it a global crisis, it also exists at the micro and mesoclimatic levels. Hambach forest is an ecosystem on the edge. On the edge of an open lignite pit mine. As our recent study revealed the Hambach opencast mine is the heat pole of the region (in the heat of summer 2018 almost 45°C in average). Apart from having been reduced to a very small remnant, the Hambach relict forest is now threatened by heat and drought edge effect. (Pierre Ibisch) 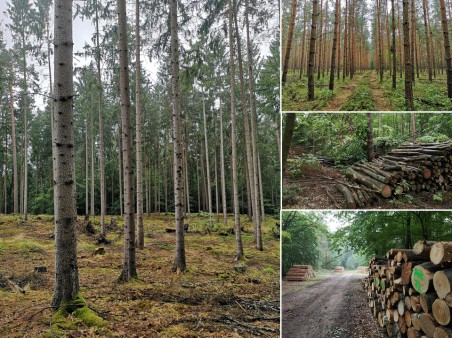 18 August 2019. In Germany, we face a forest crisis, which has been induced by extreme drought and heat, especially in the summers 2018 and 2019. It has been worsened by forest use and silviculture. We see enormous damages and dieback in conifer monocultures, but also in beech forests. The debate is becoming increasingly heated, and many foresters are reacting to the criticism that it has long been understood that monocultures no longer function; that would no longer be news.  If you observe our forests, as I did this morning along the Sunday jogging parcours south of Eberswalde, you can see: Pine and douglas fir plantations are out there, and they are kept as such. Even worse: Timber is harvested according to business-as-usual practices, whilst the timber market is flooded with cheap timber. Cutting goes on, even in summertime, whilst forests suffer from extreme dorught. Forest management is slow to respond to challenges, and it can be pretty hypocritical. (Pierre Ibisch) 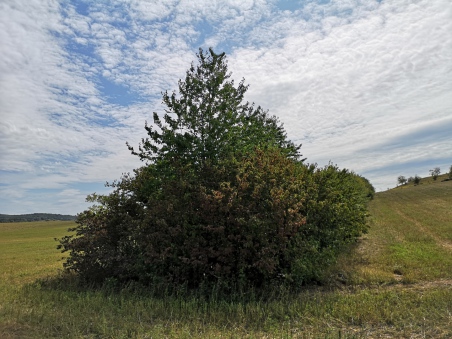 17 August 2019 - A hike through the surroundings of the ecovillage Brodowin in the biosphere reserve Schorfheide Chorin in Brandenburg, Germany, can easily give you a feeling for an ideal cultural landscape. Forests, woodland, organic farming and lakes. For decades, visionary people have been developing this place, among other things by setting up orchards and creating new hedges. Recently, we talk so much about reforestation. Look at this hedgerow. The kind of tree planting we really need in our landscapes to break the winds, cool the surfaces, retain water and conserve biodiversity (Pierre Ibisch).